When the power of love overcomes the love of power, the world will know peace. - Jimi Hendrix 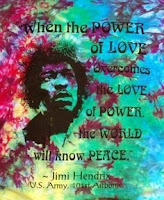 I got to know Jimi Hendrix when I was studying in America. It was the time of ignorance for me and his music, I suppose, had some positive influence on me. Positive in the sense it opened up more rooms of contemplation.

I remember I had roughly four CDs of his. They were the re-mastered version of Are You Experienced?, Bold As Love and so on. Not all the four compilation titles I can recall. This tells how ‘ignorant’ I was with the surroundings. I’ve probably left some in Taiwan or China when I brought them along with me. What’s gone doesn’t matter (especially in the material sense); what matters can no longer be found in the physical forms, but in the mind.

Read a little about him too. I think his story can be one of the inspiring stories for us to learn something from. Not saying I know I lot about him – probably I will or I should – his going against many odds in life in the then racially unjust society with love of music must have something great for all of us. 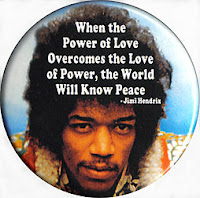 And he died young – not that long life matters either – and he died young. Many of us live through vain and till we become Alzheimer’s disease bound without knowing what we’ve given and learnt in life. When are we human beings going to learn time and space don’t matter?

So what matters? Love and compassion. To all of us, be compassionate, for we are all one.

When the power of love overcomes the love of power, the world will know peace. - Jimi Hendrix
Posted by John J. C. Lew at 4:54 pm

What a phrase! And also a good reminder for us...as we constantly witnessed so much hatred and bickerings amongst mankind today.
"If we consciously embrace compassion, empathy, love, patience and forgiveness, the future world will be incredibly different than we don't. If enough of us can somehow elevate the consciousness of humankind - if we can commit to changing the collective future by improving our individual futures - we can actually change the future of the entire world and all its inhabitants. Compassion is related to love, in that it comes from the heart, just as love does." excerpt taken from Same Soul, Many Bodies pg.91,92.
Yes, we all are one. By loving one another, are we not loving ourselves? But then, when will the world ever know peace?

Some very idealistic dreams are achievable through strong and dedicated people; but then once the dream is achieved, all mankind benefits from it.