Once a week, Johnny the Moron 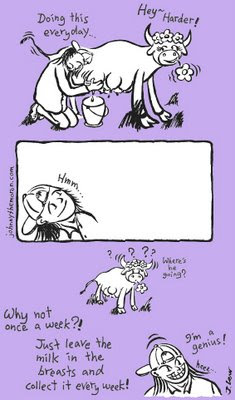 (Click on for clearer picture)
Johnny "the moron" once worked at a farming factory. One of the jobs he hated most was milking the cows. He always asked himself why he had to do the work everyday.

One day out of the blue he came up with a brilliant idea: "Why not once a week? Just leave the milk in the breasts and collect it every week, instead of everyday!"

He thought doing so could cut down the amount of time he spent everyday and yet still be able to collect a total of 6-day milk at the end of the week.

Applying the same analogy, some people believe they can:

4. bring their children for a weekend material shopping spree (Total = 6 hours plus materialistic bonding) instead of reading 30-minute spiritual bed-time stories to them every night (Total = 3 hours plus quality family bonding).


You'll be surprised how many of us do things these ways...

Do we understand how frequency versus quantity (versus yet quality)?

2. If you think of any other misuse of frequencies, please let me know by writing your comments. Thank you.
Posted by John J. C. Lew at 4:17 pm 2 comments:

Thou Shalt Not Kill. Go Vegetarian

"Thou Shalt Not Kill" - Go vegetarian 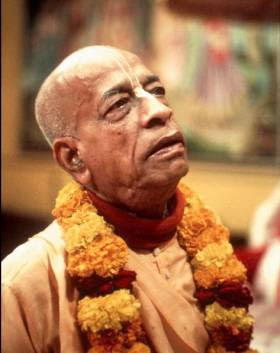 Srila Prabhupada: We have to accept all the injunctions of the scripture as they are given, not only those that suit us. If you do not follow the first order, "Thou shalt not kill," then where is the question of love of God?

Visitor: Christians take this commandment to be applicable to human beings, not to animals. 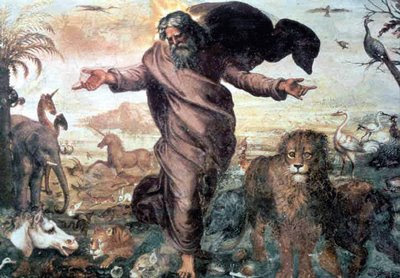 Srila Prabhupada: The Vaisnava philosophy teaches that we should not even kill plants unnecessarily. In the Bhagavad-gita [9.26] Krishna says:

"If someone offers Me with love and devotion a leaf, a flower, a fruit, or a little water, I will accept it."

We offer Krishna only the kind of food He demands, and then we eat the remnants. If offering vegetarian food to Krishna were sinful, then it would be Krishna's sin, not ours. But God is apapa-viddha - sinful reactions are not applicable to Him... Eating food first offered to the Lord is also something like a soldier's killing during wartime. In a war, when the commander orders a man to attack, the obedient soldier who kills the enemy will get a medal. But if the same soldier kills someone on his own, he will be punished. Similarly, when we eat only prasadam [the remnants of food offered to Krishna], we do not commit any sin. This is confirmed in the Bhagavad-gita [3.13]: "The devotees of the Lord are released from all kinds of sins because they eat food that is first offered for sacrifice. Others, who prepare food for personal sense enjoyment, verily eat only sin."

Srila Prabhupada: Yes - in the animal kingdom. But the civilized human being, the religious human being, is not meant to kill and eat animals. If you stop killing animals and chant the holy name of Christ, everything will be perfect... I think the Christian priests should cooperate with the Krishna consciousness movement. They should chant the name Christ or Christos and should stop condoning the slaughter of animals. This program follows the teachings of the Bible; it is not my philosophy. Please act accordingly and you will see how the world situation will change. 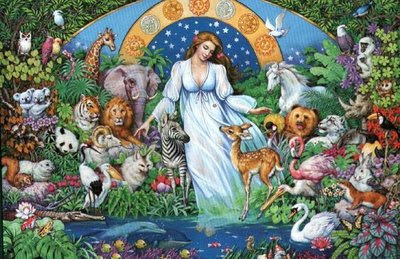 "Thou shalt not kill" means "The Christians should not kill any living beings."

Note:
1. Source of the conversation: Science of Self-Realization (pp. 129-33) [http://www.harekrishna.com/col/books/VEG/ht/ahightaste.html]
Posted by John J. C. Lew at 6:26 pm No comments: