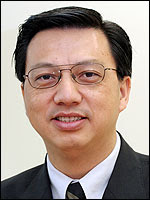 “I would emphasise more on prevention and healthy living instead of curing patient and health,” said Liow in a statement. “I’m concerned about the health of the people in the country, especially with regard to the healthy lifestyle,” he added.

Meat consumption has been conclusively linked to heart disease, strokes, diabetes, obesity and several kinds of cancer. Adopting vegetarian is the key in preventing a variety of diseases, including today’s leading killers, he said.

Vegetarianism is certainly good for the environment and for your health.
A recent UN report (2006) determined that raising animals for food generates more greenhouse-gas emissions than all the cars, trucks, ships and planes in the world combined. The report stated that the meat industry is ‘one of the top two or three most significant contributors to the most serious environmental problems, at every scale from local to global’.

“Liow is promoting healthy living and we commend him for leading by example,” said PETA director Jason Baker, adding that going vegetarian “is the best thing we can do for health, animals and the Earth”.

Vegetarian diet was also one of the best ways to fight against the abuse of animals raised and killed for food, he said.