Spirit, Energy and Material worlds; Messages behind the movie Avatar

Watching the movie Avatar is an eye opener. The colors of flora and fauna are splendid and scenes of nature and jungles breathtaking. While the eye candies are delights to watch, the messages behind the film are more appealing to some, and to me too.

Let's look at the following scripts:

1: “I'm trying to understand this deep connection the people have to the forest. She (Neytiri, Na'vi native) talks about a network of energy that flows through all living things. She says all energy is only borrowed, and one day you have to give it back.”

In ancient and traditional world of living, jungles and rivers have always been the source of shelters, food, water, clothes. Any many ancient writings of scholars talked about how lives come and go around like an exchange of energy, albeit in different linguistic presentations. Many of us look at living and dying with such extreme joy and fear respectively, to the extend of horrible turbulence of emotional disturbance. If we see things through to their very real existence, all material things wear off, there are lifespans to everything. But the energy within lives on, taking different forms as mortal existence.

If we can come to appreciate all things are only borrowed, i.e., including our bodies, will we see life a little differently then?

Jake said to the deer-like animal when taking her life. Neytiri watched to see if he had understood the meaning of life.

If you “have to” kill a living being, kill her quick. Kill her with the least pain involved. Offer your apology, give your reasons, ask for forgiveness, show your appreciation and share the benefits with mankind...

The Na'vi people kill for 'good enough' and for the very basic need of everyday life. There is never greed or luxury in the motive. It's always about sustainability of the material bodies and balancing energy flow.

Look around us these days, the ideas of “simplicity”, and “good enough” are hardly found in the commercial world, where people are made into consumers of all sorts of things. We're being brainwashed into believing we need so many different kind of things in order to live a quality life.

I wonder if 'quality life' only means 'materialistic life' but not 'meaningful life'...

And how many people say “Thank you” to the unwilling sacrifice of animals? We take animal family members apart and we kill them for their flesh brutally and we make them into unrecognizable canned food and try to deceive people and we waste them by only finishing less than half of whatever we put into our stomachs. 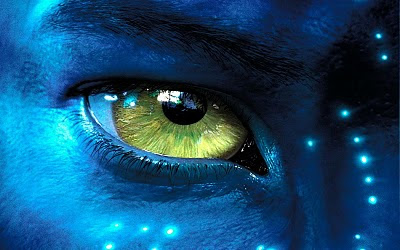 It's obvious that's no appreciation and gratefulness... There isn't even awareness!

It's sad. It's a sad sad situation.

Human beings, please wake up to the reality, sooner or later you have to face the truth.

All of us want to be intelligent and wise. Vegetarianism can be one of the better approaches.

1) The book 《大戴礼记》(Da Dai Li Ji； Big-DAI-Rites-Record) is a classical literature on 儒学 (ru xue； Confucianism studies). Most of the articles in this book belong to students of 孔子 (Kong Zi； Confucius) and other scholars of confucianism around the time of 战国时期 (zhan guo shi qi； warring-states-time-period), 475 BC - 221 BC.

The first person who studied such Confucianism studies was 劉向 (LIU Xiang), the great Han dynasty (202 BC–220 AD) scholar. Han scholars 戴德 (DAI De) and 戴圣 (DAI Sheng) collected and edited 130 articles and simplified them into 85. And thus it's called Big-DAI-Rites-Record.

This book narrates ancient Chinese rules and rituals, standards of the society and also is a text book on benevolence, humanity, justice, virtue and morality. It governs the management system and thoughts of Confucius' benevolence and justice.

2) Other translated names of the book include:
a) Book of Rites with Commentaries of DAI De;
b) Record of Rites of the Elder DAI. 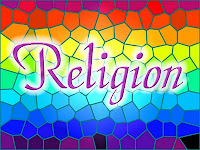 The following is a brief dialogue between a bearded scholar and a religious guru.

In a round table discussion about religion and freedom in which many scholars and gurus were presenting ideas and opinions as to how to make the world a better place, the following conversation between two participants took place at a recess...

A bearded scholar maliciously, and also with interest, asked a religious guru: "Hi guru, what is the best religion?" 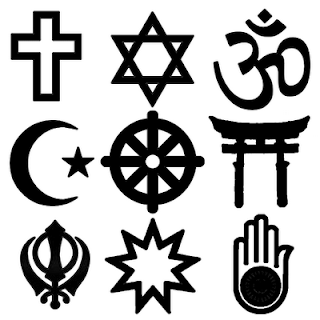 The bearded man thought the guru would say: "My own religion" or "The oriental religions, much older than Christianity."

The guru paused for a while, smiled and looked at the bearded man in the eyes, which surprised him because the bearded man knew of the malice contained in his own question.

To get out of his embarrassment with such a wise answer, the bearded man asked: "What is it that makes me better?"

"The religion that will do that for you is the best religion."

Hearing this, the bearded man was silent for a moment, marveling and even today thinking of his wise and irrefutable response:

"I am not interested, my friend, about your religion or if you are religious or not. What really is important to me is your behaviour in front of your peers, family, work, community, and in front of the world."

"Remember, the universe is the echo of our actions and our thoughts."

"The law of action and reaction is not exclusively for physics. It is also of human relations. If I act with goodness, I will receive goodness. If I act with evil, I will get evil."

"What our grandparents told us is the pure truth. You will always have what you desire for others. Being happy is not a matter of destiny. It is a matter of options."

"There is no religion higher than the Truth." 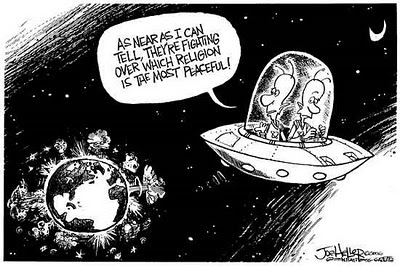 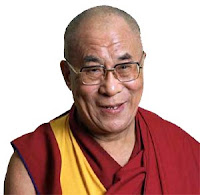 1) In case you're interested, the bearded scholar is Brazilian theologist Leonardo Boff and the religious guru is the Dalai Lama.

2) Subjects and greetings of the conversations modified for mysterious presentation to initially hide the identities of the two beings. Ha!

3) I got this from an email circulation and it seems to be in a few blogs and discussion groups. I presume the conversation really took place.
Posted by John J. C. Lew at 7:49 pm 2 comments: