(Click on the pictures for larger views)
or for convenient viewing at: 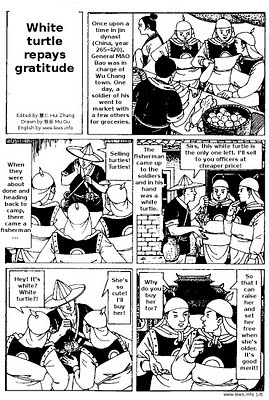 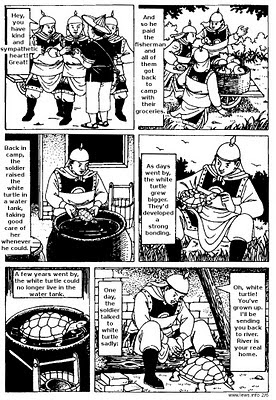 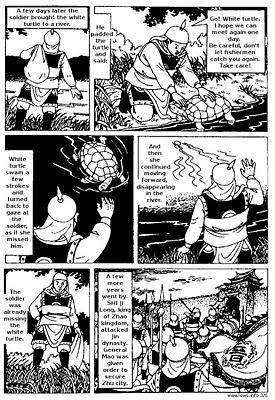 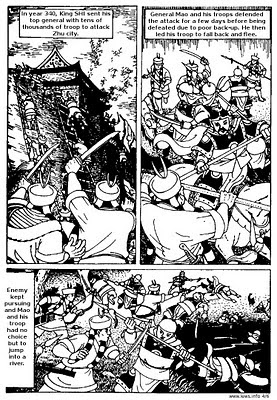 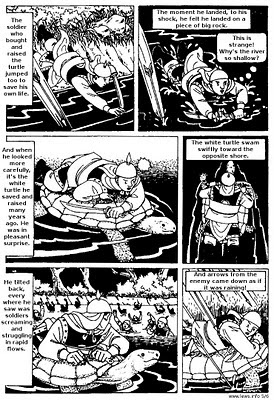 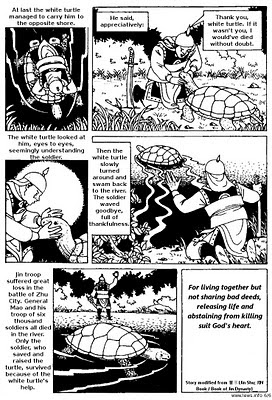 When they were about done and heading back to camp, there came a fisherman...

The fisherman came up to the soldiers and in his hand was a white turtle.
He said: Sirs, this white turtle is the only one left. I'll sell to you officers at cheaper price!

Soldier A: Hey! It's white? White turtle?!
The soldier: She's so cute! I'll buy her!

Soldier B: Why do you buy her for?
The soldier: So that I can raise her and set her free when she's older. It's good merit!

And so he paid the fisherman and all of them got back to camp with their groceries.

Back in camp, the soldier raised the white turtle in a water tank, taking good care of her whenever he could.

A few years went by, the white turtle could no longer live in the water tank.

One day, the soldier talked to white turtle sadly:
Oh, white turtle! You've grown up. I'll be sending you back to river. River is your real home.

He padded the turtle and said:
Go! White turtle. I hope we can meet again one day. Be careful, don't let fishermen catch you again. Take care!

White turtle swam a few strokes and turned back to gaze at the soldier, as if she missed him.

And then she continued moving forward, disappearing in the river.

The soldier was already missing the white turtle.

General Mao and his troops defended the attack for a few days before being defeated due to poor back-up. He then led his troop to fall back and flee.

Enemy kept pursuing and Mao and his troop had no choice but to jump into a river.

The moment he landed, to his shock, he felt he landed on a piece of big rock.

"This is strange! Why's the river so shallow?" He thought to himself.

And when he looked more carefully, it's the white turtle he saved and raised many years ago. He was in pleasant surprise.

The white turtle swam swiftly toward the opposite shore.

He tilted back, everywhere he saw was soldiers screaming and struggling in rapid flows.

And arrows from the enemy came down as if it was raining.

He said, appreciatively:
Thank you, white turtle. If it wasn't you, I would've died without doubt.

The white turtle looked at him, eyes to eyes, seemingly understanding the soldier.

Then the white turtle slowly turned around and swam back to the river. The soldier waved goodbye, full of thankfulness.

Jin troop suffered great loss in the battle of Zhu City. General Mao and his troop of six thousand soldiers all died in the river. Only the soldier, who saved and raised the turtle, survived because of the white turtle's help.

The compassion and humanity of the army officer can create miracle.
White turtle wanted to repay gratitude regardless of how difficult the situation could be.

In order to live together (and thus probably or unavoidably creating bad merits) but not sharing bad merits, preserving life forms and abstaining from killing is in line with God's will.
The individual merit of the soldier who saved and raised the turtle helped himself to be rescued when things were bad. Bear in mind that he most probably had done much more good deeds than just saving the turtle, with a heart of compassion and sympathy as he had. And in God's will he be saved and continued his good deeds and merits making, helping all living beings on earth.

And yes, we're gonna be just like him, if not more!

Thank you for some advice. They go:

All beings are the same source, only the bodies and look are different.

Sensing the fragility and therefore salvaging all the moments, presenting the best emotional care...

With a single seed of kindness, creating a big piece of peaceful jungle. With a heart of wisdom, creating good deeds, making the evilish turn angelic!

Ha, there are some I've run of good words to translate. Hmm, I must be brushing up my English sooner!

Thanks again for sharing your ideas.

A believer in the law of cause and effect, I believe kindness, like a boomerang always returns and a good deed is never lost.

May I take this opportunity to share with you a quote from the late Leo Buscaglia.

"Too often we underestimate the power of a touch, a smile, a kind word, a listening ear, an honest compliment, or the smallest act of caring, all of which have the potential to turn a life around."

John, let's encourage one another to do good.

(Got the email from a dear friend who of course wouldn't mind me sharing great contents with you and me!)

A little kindness everyday gives rise to abundance of hope for a long time to come.

Sharing itself is a wonderful kindness.